I don't think I've posted these before. I thought I'd share a couple of views that were interesting from down around my way. I can't remember exactly where the first shot was taken but I do know it was somewhere up in the San Bernardino mountains looking down over what I believe is the Inland Empire which is about, oh, 40 miles east of Los Angeles. That's not haze of fog you're looking at in the photo, it's smog. It's only when you get up this high that you really see the smog we deal with in Southern California, particularly the L.A. Basin, called that because we're surrounded by mountains. 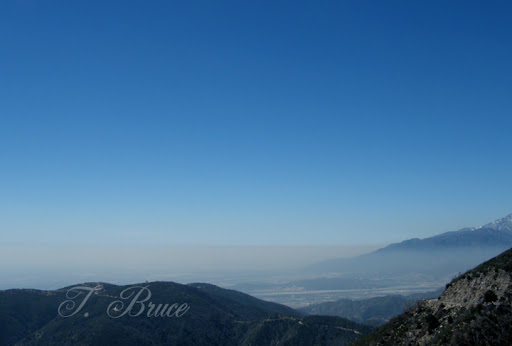 The shot below was taken from a location up overlooking Bonelli Park and Puddingstone Reservoir that is just up the street from me, the one I visit a lot. This is looking west toward Los Angeles. Those buildings are downtown Los Angeles, about 30 miles away. You can see this was a very clear day. I don't think this was a day last year when we had a lot of fires but it might have been which would explain the color. It didn't alter the photo other than to crop it. 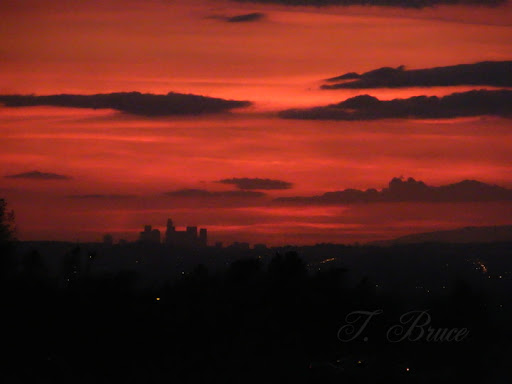 I'll note that a lot of times you can't see those buildings. This was a very clear day (evening). When I'm able to see downtown L.A. like this it always reminds me of the Emerald City from the Wizard of Oz.

To participate in Sky Watch Friday and/or to see more great photos of the sky from all over the world Click here or on the Sky Watch Icon below:

Interesting? They're both stunning!

Fantastic shots once again, the last one is incredible.

Have a great weekend
Guy
Regina In Pictures

This Is My Blog - fishing guy said...

T: Real beauties from the mountains. I love that red sunset over the city, so nicely done.

Terrific shots! The second one is truly breathtaking! Such dramatic colors! Fantastic!

Have a lovely weekend!

Just follow the yellow brick road. Like those exist in LA. Maybe metaphorically with the man behind the curtain.

PS - you are certainly right...saliva does not equal water. I just took watery to mean more liquid-ish than simply water. I'll definitely keep that in mind for later posts as I had some photos of oil and some of beverages that I had thought about submitting. Sorry!

Pretty captures saxy! I really like your red image, must have been during the fires.

Wow, I love that second shot. So magnificent and i love the city scene silhouetting in it.

Really great shots. I recognized the first view right away.

Very colourful. A face of serenity!

beautiful captures tanya...the second is particularly wonderful as like you say, you don't often get the downtown skyscrapers in shots from afar. it is amazing coming down out of victorville and seeing the smog layer below isn't it? we have a little valley bowl action going on here where i live now...on days when there is little air movement we get a haze.

Wow! That bottom photo sure is a stunner! Gorgeous.

I agree with everyone about the second shot. I see the flicker of the lights. Just gorgeous.

I just love the second shot TB. I hear the smog has become quite a problem in California.

Stunning skywatch images, I like the sunset image more for its sheer spread of colors.

Wow! These are stunning shots! Love the composition in both of them, and the colours. The red is really amazing in the last shot!

The word stunning is used for these photos and fantastic! I add to this breath taking, especially the second photo, though the first one is also beautiful, but smog is spoiling the idea of beauty!

Just so stunning in depth of colour.

both photos are spectacular! love the blues on the top photo, and the reds, so dramatic.

Stunning photos. Love the mist in the first one. =)

Such great pictures. I love all the color.

They are both incredible skies and stunning colours. The first is my favourite. Such an awesome view!

Great photos and that last one does indeed look like "Emerald City" but 'on fire'.

Marvelous shots! I know how challenging it can be to capture views of the LA Basin.
Hugs and blessings,

I've never lived in an area w/ smog, much less, that much! But that sunset photo is very cool! That 1st layer of clouds actually looks like another set of tall buildings across what looks like a body of water. That's so cool!

The red sunset is gorgeous and unbelievably surreal! Amazing!!

It might be smog, but it looks good in these photos.

Gor-ge-ous shots! Makes me a little home sick. I am a native Californian, spent my formative years growing up in Anaheim.

I love that last one...the colours are beautiful, likesomething out of a fantasy..

I remember my first flight into LA. One moment we were flying high up in bright blue sky abnd then we were descending down through this thick , yellow sludge. Apparently they had heavy smog that day.

I walked out of the airport and looked up at the hazy yellowish sky and thought, 'There's blue sky up there!'...

Great great photos and the second photo reminds me of a fiery red spot in the sky i wanna take last Friday sunset..i took a shot at it but it is not as nice as the one you got here. :)

I love the colour of that second photo! Strange that you say there were fires causing the red, and yet you can see 30 miles!

2sweetnsaxy
"I can do all things through Christ which strengtheneth me" (Philippians 4:13). 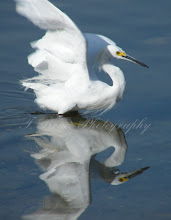